The last day! Got up around 8 to start packing. Remember, I came with my large and medium suitcase, and the only reason I was able to get it out of Vancouver, was by talking my way through security, saying things like “Oh the check in counter said it was fine, don’t worry.” I knew I wouldn’t be able to do that in Mexico, so I was able to put almost all of my things in the medium suitcase, and put that one in the big suitcase, like a nesting doll.

JP, his Mom, and Brother took me to the airport in Guadalajara, where I would fly to Mexico City for my connection to Vancouver. He walked me in and showed me where I needed to go, but he couldn’t wait with me, as his Mom was parked in the loading zone.

Dropped my bag off no problem. breezed through security, and found a place to sit until my flight was ready to board. For some reason, I didn’t notice the big letters on my ticket that said “BOARDING – 12:00”. I knew my flight was at 12:45, so assumed they would board around quarter after or so. There were automated announcements informing people about the flights. There would be an announcement every time a flight was ready to board, last call, departing. I got up from my seat at 12:10, just as there was the announcement saying that my flight was now boarding. It was a two minute walk to the gate, and just as I arrived, a message came on and said “This is the last call for flight ###, please board immediately.” There was nobody in line at the gate when I got there, so I thought I was the last. Luckily, there were still people in line further down the ramp.

Most people on the plane had chosen seats near the rear, just as I had. I noticed that the overhead bins back there were pretty full, and that the rest of the plane was pretty well empty, everyone seemed to be congregated at the back! I didn’t even end up going all the way back to my seat, I just put my stuff in an empty overhead bin, and sat underneath that, in the middle of the plane. It was just over an hour gate to gate.

Got off, collected my bag, and then went in search of the Air Canada check-in desk. which was somewhat difficult, as it was at the other end of the airport, and I was dragging my bag with a broken wheel.

When I arrived at the desk, I waited a while for some lady trying to check a soccer ball, and then an Australian couple with three large bags, and some paperwork that the worker and her supervisor were reviewing. Not sure what it was, but they took a long time. When I finally got up to the desk, I put my bag on the thing, and some worker on the side pointed out to the agent who was helping me, that my bag was overweight. I guess the other airline that I was on earlier had a higher weight allowance, as they caused me no problems.

The worker informed me that I was 2.5kg’s overweight. She told me to take a few things out. I knelt down right there and began trying to unzip my nesting dolls. I struggled with one of the zippers, and I never even actually got my suitcases open, before the lady just took a second look at the number on the scale, and said it would be fine. Sure lucked out there. Breezed through security, and waited for my flight home.

I was asked if I would consider moving from my window seat on the right side, to the aisle seat on the left side, so a family of three could sit together. I said it was no issue, and moved. After take off, I reclined my seat, and this clip of Ellen’s stand-up days came to mind.

Felt like home when I got on the plane and noticed the Canadian crew. And I knew I was home when, at YVR, I heard some guy say, “Oh sorry about that, I bumped you, my apologies.” 😂 The 5-1/2 hour flight was long, there were only drinks offered for free, no snacks, just food for a fee. Touched down to a beautiful sunset around 8:30. 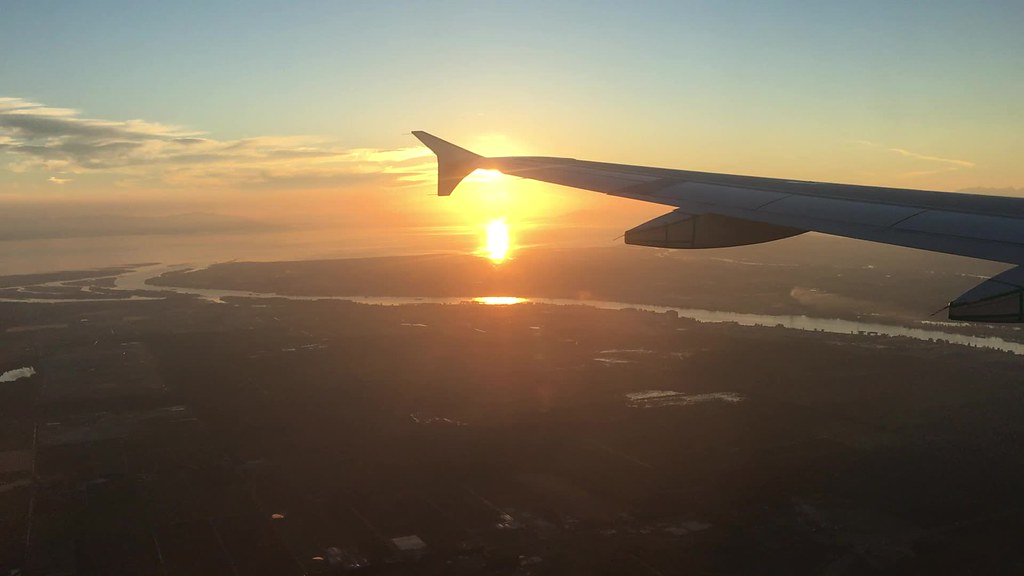 It felt quite strange to arrive home, and probably will for another few days.

I will be posting a video, hopefully by tomorrow. So check here again to see the last portion of my trip.