Last day in Zaragoza, heading to Madrid this evening to fly home on Wednesday morning.

Arose around 10, and went out just after 11:30. We were going to get a haircut for me, at a place which was a two-minute walk away. It was sure an experience I’ll remember. Waited for a short time after getting there, and then was asked how I wanted it done. The hairdresser wanted me to search for images of hairstyles on Google, and show me which one I would like. She ended up pulling out her phone, finding one online, and asking if I liked it. The picture was a shot of Shawn Mendes. Said that would be fine, and then was told to come over to the sinks so she could wash my hair. Even though I had already washed it before I came, she insisted on doing it again. Had a nice head massage for a few minutes, then up we went to the other chair.

Definitely a different kind of cut than I’m used to. She did my whole head with nothing but a comb, and one pair of small scissors. Also used a hair clamp or something to keep part of it out of the way while working on a certain area. She took a while to complete it, but I believe it’s because she was taking her time, and not rushing.

Near the end, Nico got up and went to the other side of the room. I turned shortly after to see him covered in a face-mask type of thing, getting a spa treatment. Once I had finished my cut, I was herded over to the sink for another wash, to make sure there were no lose hairs straying about. Got another nice shampoo massage, and then was asked if I wanted the same thing as Nico was having done. Didn’t see why not, so with my eyes closed and head back, I let them rub a few creams on my face, smooth out the skin, and whatever else they did [re: eyes closed].

Skin was quite soft after that, quite the experience at the salon. The face stuff turned out to be complimentary, as Nico is a friend and regular of the store. That all being said, I did not look like Shawn Mendes when I left the building.

Stoped at the convenience store/market on the way home, and got some snacks and orange juice. We got the juice from a machine, that squeezes the oranges right in-front of you, while you hold a cup underneath. Was quite intriguing.

Snacks and juice at home, some lunch made later by the housekeeper; Lentejas [lentil soup] and a schnitzel dish.

Packed up and relaxed after that, grabbed a few souvenirs down the street, and headed back to grab my things and go.

Nico and his Mom took me to the train station, said our goodbyes, and I got on board when it pulled into the station. This is one of the high-speed ones, getting up to 300 KM/HR.

Arrived in Madrid, muggy and light rain. Was using google maps to get transit directions to the hotel where I am staying the night, before heading to the airport in the morning. It said I would have to take one subway, transfer to another after a few stops, then get on a bus which would take me to my accommodations.

Lugged my suitcase down some stairs [no escalator visible] and began to wait. The signs were somewhat confusing, and I ended up on the wrong platform. Huffed my stuff back up the stairs, over, and down to the proper one. Google advertised that the train at this hour is usually “Quite busy” and typically only has “Standing room only”. Google appeared to be right in this sense. Rode a few stops, and was told to transfer to a different line. Up an escalator or two, walked a bit, down, etc. I swear I was on platform 2 when I boarded the train, but I must not have been, as I looked at my maps, and realized that I was heading the wrong way. Next stop, out, up, over, down, wait. Got a train going the proper way, and finally got to the stop where I needed to transfer to the bus.

I thought that I was being sent to a city bus. It said I would ride for 10 minutes, for one stop. Arrived to the bus area, and was displeased to find out that Google had tried to send me on a Greyhound [rip] style service, where a ticket would be required. I put the kibosh on that idea, and consulted my phone for another route. I have two phones going here. One has a local sim card in it, so I can use the local network with out incurring outrageous roaming fees, and that gives internet to my Canadian phone. [I know I could get by with one, but it’s a long story].

It came to my attention that the phone with the local card in it only had 1% battery left, as I hadn’t been conserving it. So I reached for my battery pack, only to see that it had 0% of a charge left. My Canadian phone was at 15% left… Searched around a bit for a wall plug, but could not find one at all. Couldn’t get any free wi-fi outside, so with 1% battery left, I quickly ordered an Uber car to come and pick me up. Marta was my saviour of a driver, and was there within a few minutes, sporting a black Audi. Although we didn’t talk for the 15 minute drive, she really did me a solid. It was only 15 Euros, so it wasn’t too bad.

Staying in this large apartment complex hotel thing, with several buildings. Here is a picture I found online. 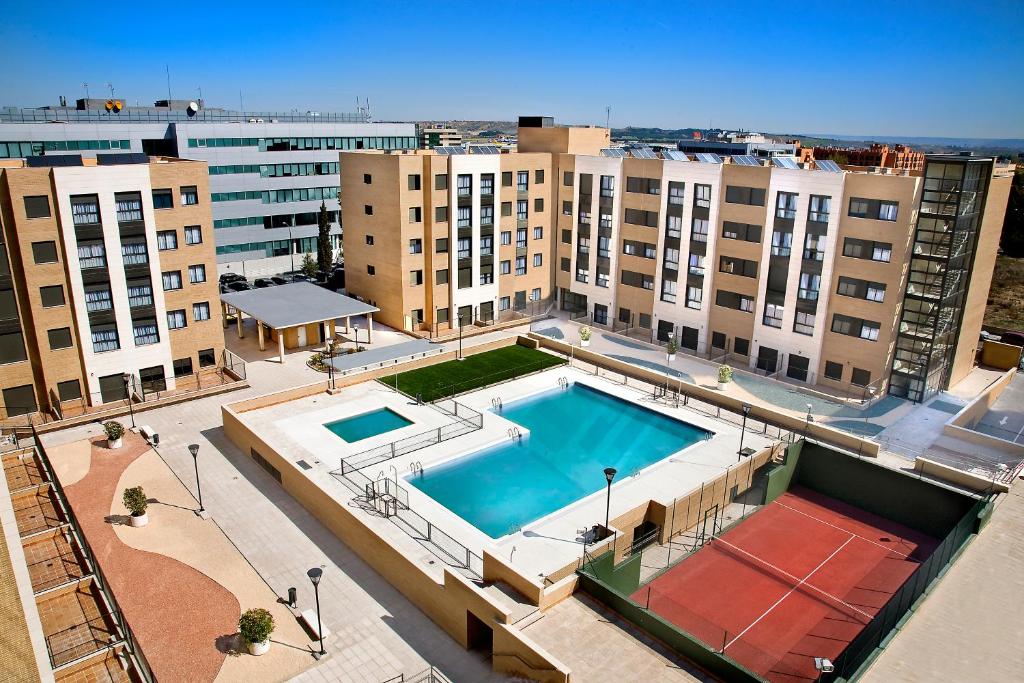 Weather got up to about 41 apparently today in Zaragoza, slightly cooler in Madrid when I got here, about 37 or so.